Harnessing the Power of the Sun, One Solar Panel at a Time

Over the past several years, solar power has taken off. With residential, non-residential and utility-sized projects popping up all over the country, solar power is an environmentally-friendly and sustainable alternative form of energy that’s continuing to grow.

From rooftop solar panels on homes and businesses to ground-mounted utility solar projects, we are harnessing the power of the sun to fuel our electrical needs, one solar panel at a time.

Here are four examples of growth within the solar industry that’ll quickly illustrate how far we’ve come in the past few years, and where we’re headed in the future.

Solar energy accounted for 32% of all new electricity generating capacity

According to Solar Energy Industries Association (SEIA), the U.S. solar industry grew 34% in 2014 compared to 2013. Solar power accounted for 32% of all new electricity generating capacity in the U.S., coming in after natural gas which generated 42% of new electric capacity. 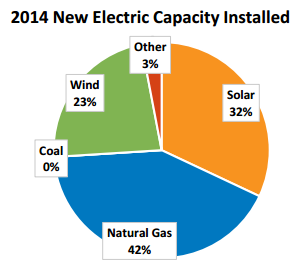 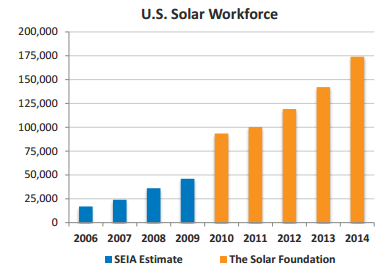 Utility PV grew 38% in 2014 compared to 2013, coming in second to the residential segment which grew 51%. Well underway, 2015 is expected to be another year of continued growth for the solar energy sector. Here’s a list of major solar projects in United States for 2015. 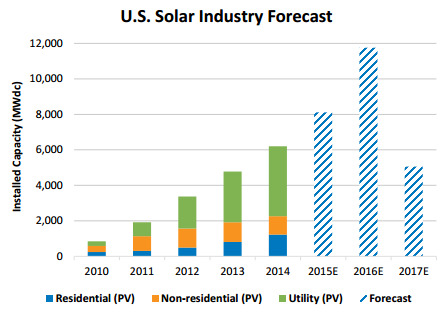 As the issues of depleting fossil fuels and global warming become more and more urgent, developing and harnessing the power of renewable energies is even more important. Solar energy is one of the solutions to generate power, without generating carbon emissions. In addition to helping eliminate harmful gases released into the atmosphere, solar energy also has a very small affect (if any) on the environment.