Believe it or not, there are still some contractors who don’t realize the savings of 20 foot conduit and are hesitant to use it for applications like retail stores, warehouses, utilities, mass transportation infrastructure and other large runs. There are many projects where 20 foot conduit can save electrical contractors both time and money. Don’t take my word for it— hear the outstanding feedback I’ve received regarding the advantages of using 20 foot conduit.

In Denton, Texas, Humphrey & Associates discovered that 20′ EMT was perfect for high bay lighting installations. Tommy McCormick, Humphrey’s project manager and estimator, saw the potential to cut both labor and coupling costs in a variety of installations, reporting that, “You can just fly when you are using it in elevated installations. I’d assign the savings largely to the faster installation times though you also use fewer couplings. The difference is in the speed of the installation.”

McCormick acknowledged some initial issues with transportation logistics needed to be overcome, but emphasized, “Even with those issues, it was still a big savings for me. I did a lot of high bay lighting jobs with it, and it was a tremendous time saver.”

Ditto that from Tom Ryckman and Duane Wolfe of Team Electric in Denver, CO where they first used 20′ EMT in several post-bid substitutions for 10′ lengths in large “big box” retail construction jobs and a parking garage, citing one example of 1/2 and 1 1/4 EMT used in approximately 60 runs of 350′ each.

Mr. Ryckman, president of team electric, states, “It came in real handy on the branch feeders where we’d throw up one pipe instead of two.” Duane Wolfe, Team Electric’s project superintendent adds, “We’d figure the needed pieces and make any necessary bends, then band it and lift it and just fly.”

Team Electric had the conduit drop shipped to the site they were working at, but as Duane Wolfe said, “It wasn’t any problem moving it to other sites. In fact, any surplus I’d have left over, I’d quickly find the opportunity we’d have in concurrent smaller jobs and use it there as well.” With a front line understanding of all the variables, Duane doesn’t hesitate to consistently attribute a 50 percent reduction in his labor costs everywhere he’s used 20’ EMT.

Finally, turn to Detroit, MI and the team at Rauhorn Electric where their estimator, Todd Underhill, saw the chance to try 20′ EMT on a job for the Detroit Public Water and Sewer’s Huber Warehouse. Installers liked working with the 20′ length in high elevation runs of approximately 700′ each because it allowed them to move quicker and finish faster– something all the more important because the warehouse was in use with traffic underneath.

Underhill notes, “The number of times a scissor lift needed to lower to pick up product was greatly reduced and we were able to use existing hangers, so we were able to move twice as fast.”

While Todd suggests that moving double time here yielded just 30 percent savings on this installation, he stressed that this was more than anticipated, adding “I’m not only looking for the next 20′ EMT application, I’m also interested in using the 20′ RMC as well. The labor savings are there. It only took us one time to use this product to realize the labor savings were greater than originally thought.”

I’ve said it before and now others have too— 20′ steel conduit cuts your material and labor costs for both large and small jobs. Use it for big-box retail, airports, data centers, parking garages and other jobs that require large volumes of conduit and fittings. It can also be used for jobs like strip malls, coffee shops and gas stations, where the volume is small, but the benefit is just as big.

Now watch as we put two crews to the test. Each crew was instructed to install a 100 foot run of 2-inch EMT. The red crew used 10-foot lengths of Wheatland EMT and the yellow crew used 20-foot lengths.

Check out the video and see which team won: 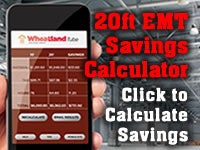