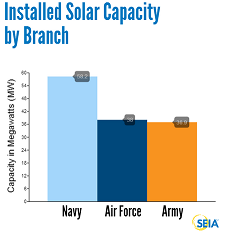 In May 2013, the Solar Energy Industries Association released the report, “Enlisting the Sun: Powering the U.S. Military with Solar Energy,” which included the U.S. Military’s plan to introduce renewable energy sources into every day practices. In the past year alone, the U.S. Department of Defense (DOD) spent more than $20 billion on energy and consumed over five billion gallons of oil.

In attempt to comply with the DOD’s objective requiring 25 percent of total facility energy consumption to come from renewable energy sources by 2025, U.S. Military teams have enacted aggressive tactics. To date, the Navy has installed more than either the Army or Air Force, but all U.S. Military branches continue to make solar a vital piece of the efforts to meet their renewables targets. Cost effectiveness is not the only reason the U.S. Military is turning to solar energy relief.  Solar energy provides:

The growing adoption of solar projects across Navy, Air Force, and Army bases has led to at least 31 states moving forward in the solar market. Solar’s rapidly growing role in the military will ensure a more able, efficient, and secure armed forces in the years ahead.